I didn’t know much (or cared) about the Zodiac. But, this was a hot button issue that got a ton of people riled up. When there’s such intense attention on a topic, my first instinct is to look for potential app ideas that could go viral. I launched a parody Gap logo maker a few months back which took off on the coattails of the news of the horribly designed logo.

The first thing I did was do some simple queries for “zodiac” and related keywords. Most of the top sites on the SERPs were timing out or simply returning errors. This was my first real clue that there was a lot of interest, and that there was massive traffic surrounding all things Zodiac.

But why did people care? It was simple: people’s Zodiac signs may have changed. And to the people who put weight in their daily horoscopes, this was a Big Deal. All the articles about the Zodiac change listed a table of the old Zodiac dates, and a table with the altered new dates.

But there was no site that simply told you what new Zodiac sign you were.

This was it: I could build a simple app that lets users enter their birthdate, and then tell them if their sign changed, and what that new sign is.

I kept the implementation as dead simple as possible: just a static HTML file with some javascript. The site functionality was:

I built it in about an hour, and the result is at http://www.didmyzodiacchange.com.

Update: Bemmu asks: But how did you get the site noticed initially?

I didn’t do anything besides send it to a dozen friends and told them to like it and tweet it. It got picked up into the realtime widget almost immediately. This probably was a factor in getting the site up so high in the SERPs.

The results surprised me.

I thought this would be another viral winner, driven by Facebook likes and Tweets. But instead, the majority came from unexpected Google traffic.

On the morning of January 14th, my site got above the fold for the search term “zodiac change”, which resulted in this traffic: 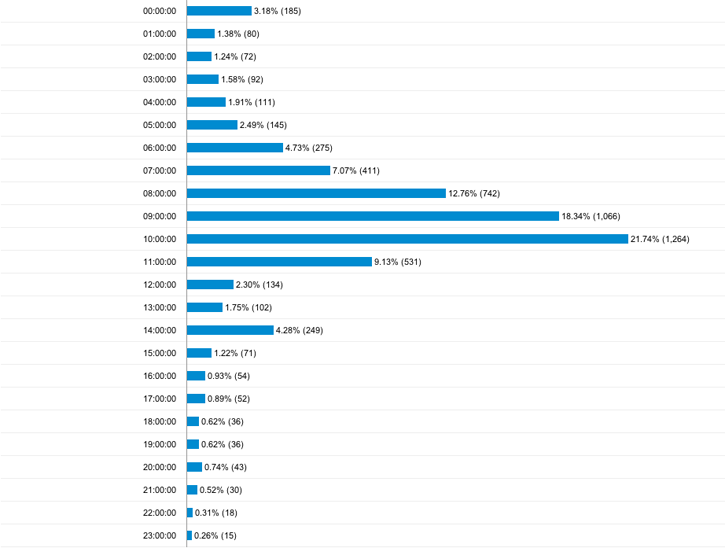 My speculation is that my site was riding a “freshness bump” due to two reasons:

I was pretty excited, because not only was the search volume relatively high, but I was seeing CTRs on my ads of up to 2-3% at a $5 CPM. Take note: the horoscopes industry is very lucrative.

However, by 11am, Google had already started bumping me back down to the second page for “zodiac change”, and the traffic immediately died. I got another bump back to the first page around 2pm, but only for about 20 minutes.

Over the next week or so, the site bounced around the 1st and 2nd SERPs, and finally rested on the 3rd page where it is now. The traffic to the site now is minuscule.

In the end I learned a few things:

All in all, it was a fun experiment.

And by the way, I’m still a Sagittarius.